The Meaning
of Labbayk

Perhaps one of the most noteworthy phrases of Islamic worship, these words ring out every Hajj and Umra. 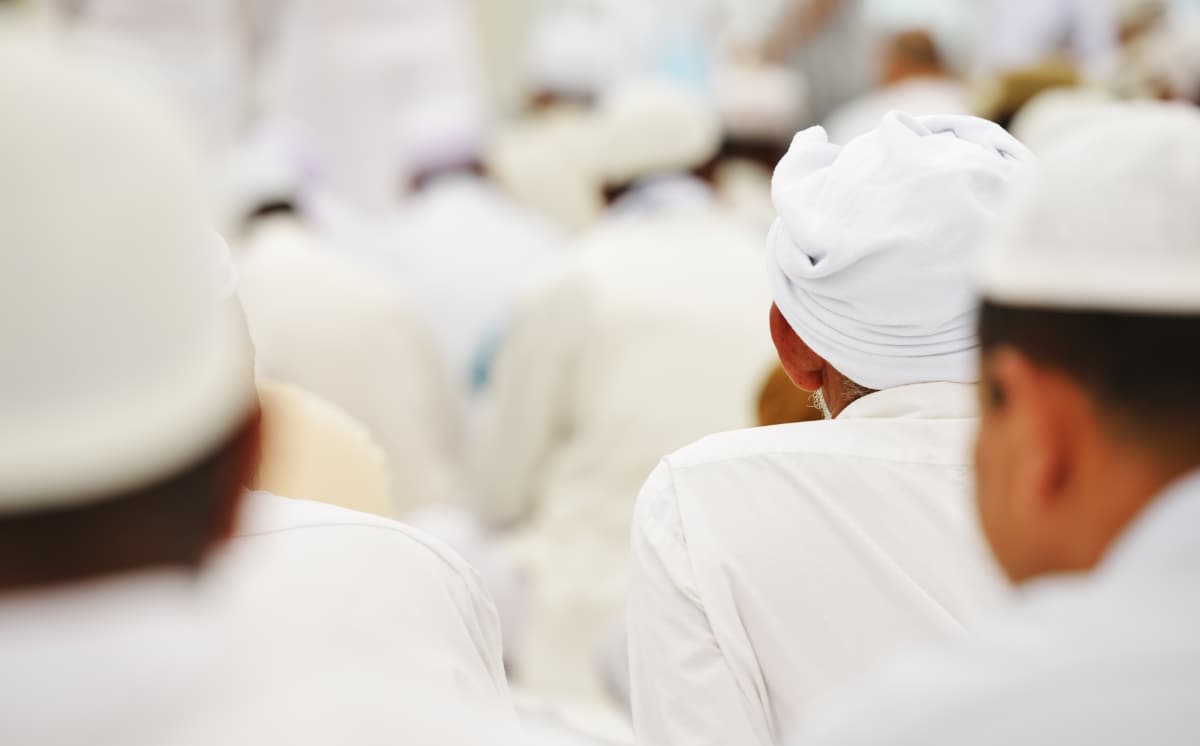 The Meaning of Labbayk

Perhaps one of the most noteworthy phrases of Islamic worship, these words ring out every Hajj and Umra.

Perhaps one of the most noteworthy phrases of Islamic worship, these words ring out every Hajj and Umra. Known as the “Talbiyah” the above phrase is just part of the invocation that is chanted by pilgrims after entering the state of Ihram on their way to Makka to perform the rites of Hajj or Umra.

The Talbiyah is a prayer of conviction, one that signifies that they intend to perform Hajj or Umra only for the sake of Allah. It is made repeatedly from the time of entering Ihram until the Ka’ba is seen by the one making it. It preoccupies the mind and tongue of the pilgrim from worldly concerns.

Commenting on this, scholars stated this shows that praying night prayers after Isha in congregation is prescribed in the Prophet’s Sunnah.

During the caliphate of Abu Bakr, people would congregate at different times of the night to pray together in the Prophet’s mosque. During Umar’s caliphate, the number of people increased to the point that there were competing congregations. Seeing this, he made an executive decision to end the competing congregations and organize people behind one Imam, appointing Tamim al-Dari and Ubayy b. K’ab alternate in leading them in prayer. (Bukhari 2010) It was called “Tarawih,” a word that means to relax, because they would pray 2 to 4 units of prayer then rest for a while. While the Prophet prayed not more than 13 units of optional night prayer in any given night, Aisha said “Don’t ask about how long and how perfect they were.” Understanding that the permission to pray at night was unrestricted and not limited to a specific number, some of the Salaf would pray an unlimited number of units in Ramadan nights. Others, such as Umar b. AbdulAziz and Imam Malik, would pray 36 units. The other three schools of Islamic law recommended 20 units of prayer for Tarawih, basing this off of what Umar organized the people to do during his caliphate.

What does the word mean?

Muslim scholars say that the Talbiyah has a number of meanings:

1. “Labbayk” means “Here I am time and again” to show that the response to Allah’s call to pilgrimage is lasting and ongoing.

4. Another meaning is that of love, the Arab’s would say imra’ah labbah i.e. a loving woman. So saying “Labbayk” is as if to say “Out of love for you, O Allah, out of Love for You.”

5. It implies sincerity, as the word “lubb” means core or essence, so when you say “Labbayk” you’re expressing your dedication to Allah’s call from your innermost core.

6. Another meaning derives from the word “ilbaab” which means to draw close. Saying “Labbayk” then means “I draw near to you, O Allah.” In a Hadith Qudsi Allah says “Whoever draws near to me by a handspan, I draw near to him by an armspan.”

All of these meanings…presence, submission, persistence, love, dedication, and proximity, hearken back to the Talbiya being a symbol of Tawheed, the one saying it seeking to establish in his own heard God’s oneness as established by Ibrahim, and announce this to those around him. Worshiping Allah alone is the spirit and aim of Hajj, as well as all the acts of worship. The Talbiyah is the key to this act of worship that the pilgrim is embarking on.

We can understand and deduce the inner dimension of Talbiyah through the Hadeeth in which the Prophet ﷺ said: “When any pilgrim utters Talbiyah, every stone and tree on his right and on his left responds with a (similar) Talbiyah, until the whole earth resounds with it.” [Ibn Khuzaymah]

Reflect on this call and the act of repeating Talbiyah loudly as well as its external and internal impact and how it is related to the call of the founder of this great rite, the intimate friend of Allah, Prophet Ibrahim (Abraham) عليه السلام when Allah The Almighty commanded him to call people and proclaim the message. Allah The Almighty promised him that He will convey his call to all people.

Allah Says:
{And proclaim to the people the Hajj [pilgrimage]; they will come to you on foot and on every lean camel; they will come from every distant pass.} [Qur’an, 22: 27]

It means: announce Hajj to mankind and call them to performclass=”alert-info” Hajj to this House which We have commanded you to build.

It was said that Ibrahim عليه السلام said, “O Lord, how can I convey this to people when my voice will not reach them?’’ It was said, “Call them and We will convey it.” So Ibrahim u stood up (on his place, or on the Black Stone, or on (the mountain of) As-Safa or on (the mountain of) Abu Qubays and said, “O mankind! Your Lord has established a House so come for pilgrimage to it.’’ It is said that the mountains lowered themselves so that his voice would reach all the corners of the earth, and those who were still in their mothers’ wombs and their fathers’ loins would hear the call.

The response came from everything that heard him, from stones, trees, and those whom Allah has decreed will make Hajj, until the Day of Resurrection: “We answer your call, O Allah, we answer your call.” [Ibn Katheer]

It is the slogan of declaring identity. It also indicates that this rite is universal and brings happiness to all creatures, that all beings respond to it and that the Lord of all creatures and the whole universe blesses this rite.

It is the symbol of distinction which differentiates between the advocators of this great Divine rite and the advocators of other contrary earthly projects. It differentiates between this journey to which the whole existence responds and the human nature finds comfort in, and other projects which, if they do not clash, go against existence and are alien to the human nature.

Back to the Guide >
Disclaimer: MyWassiyah and its affiliate entities are not a law firm, do not provide any legal advice, and are not a substitute for attorney's advice. MyWassiyah provides self-help services at your specific direction. Although all communications with MyWassiyah are protected by our Privacy Policy, communication with MyWassiyah is not protected by the attorney client privilege and does not create an attorney client relationship. We cannot provide any kind of advice, explanation, opinion, or recommendation about possible legal rights, remedies, defenses, options, selection of forms or strategies. Your access to the Site is subject to our Terms of Use.